RGI calls for a robust assessment of renewable hydrogen production and use and strongly believes that direct electrification should always take precedence, while renewable hydrogen could play a role in some hard-to-abate applications and for long-term storage purposes. 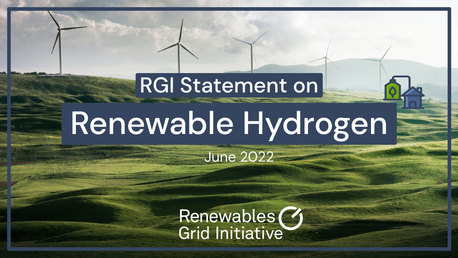 At the EU and national level, hydrogen is being included in decarbonisation strategies, and it is often presented as the sustainable replacement of fossil fuels and especially gas in all of its applications.

RGI strongly believes that direct electrification should always take precedence, while renewable hydrogen could play a role in some hard-to-abate applications and for long-term storage purposes. Renewables-based direct electrification allows for significant efficiency gains across the entire energy system. Through a more direct deep electrification, primary energy can be saved. It is therefore essential that renewable hydrogen production, which is instead associated with energy losses and inherent inefficiencies, follows a robust assessment of when, where and by whom it is really needed and where it is produced. An oversized transition to hydrogen would entail the risk of high costs for consumers and stranded assets, among others. The energy efficiency first principle and acceleration goals should be applied when designing policies and support schemes across the entire energy system.

Renewable hydrogen can contribute to system security, but it should be considered as one element of many. Flexibility is strongly and increasingly required in a system which is based largely on variable renewable energy sources, especially wind and solar. Hydrogen can provide flexibility services, but its application should be secondary to other flexibility options that are more suited to meet short- and medium- term system needs.

RGI acknowledges that scarcity is becoming the new normal. Planning renewable hydrogen production, as well as other alternative technological applications, should therefore be done with resources and space availability in mind.

Taking all this into account, we ask the European Commission, European Parliament, and Member States to carefully consider the means of the implementation of the renewable hydrogen target set in the REPowerEU Plan. To provide a sound and just hydrogen production and use in the European Union, all scenarios by the European Commission, ACER and the ENTSOs should include all sustainability considerations: ‘energy efficiency first’ principle, space and water availability for electricity generation, and its conversion to other carriers. In line with this, all scenarios should comply with climate, biodiversity, and energy security targets.

Stephanie joined the Renewables Grid Initiative in 2013. Her main responsibilities lie with RGI’s communications and media work and she is leading the good practice award activities. She previously worked in the communications team of the European Climate Foundation.
Stephanie has studied at the Universities of Marburg and Hamburg, Germany, and the University of Southern Queensland in Australia. She holds degrees in political science and journalism.
t: +49 30 2332 11017
stephanie[at]renewables-grid.eu
Back