The German Working Group of OCEaN has just published "Six recommendations for a nature-friendly development of offshore wind energy". They are an appeal to the coalition partners of the future German government to include these measures in the coalition agreement in order to achieve climate neutrality in Germany by 2045 and implement the European Climate Law and Europe-wide climate neutrality by 2050. 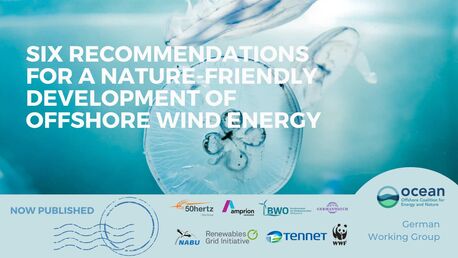 Decisions taken at the beginning of the upcoming legislative period in Germany and at European level are essential for achieving our climate targets. The development of offshore wind energy in the North Sea and Baltic Sea and its connection to the grid will play a decisive role for renewable energy generation in Germany. However, this development must take place in harmony with nature.

Against this background, the German Working Group of the Ocean Coalition for Energy and Nature (OCEaN) calls on the German coalition partners to anchor the measures elaborated in their paper "Six recommendations for a nature-friendly development of offshore wind energy" into the future policymaking at federal level as part of the coalition agreement. At the same time, the recommendations are of equally great value for the European policy, specifically when it comes to the implementation of the European Climate Act and Europe-wide climate neutrality by 2050.

OCEaN is a coalition of wind farm operators, transmission system operators, environmental and climate protection organisations that provides an open forum for discussion, where existing information and experiences are assessed and collated, needs for further research are identified and suggestions are made on how to improve planning offshore wind development for the European seas. The German working group consists of eight members: 50Hertz, Amprion, BWO, Germanwatch, NABU, TenneT, WWF and the Renewables Grid Initiative, which acts as the convener and moderator of the group as well as being a founding member.

The following recommendations represent the positions of the signatories and do not necessarily reflect the views of all organisations working together within the OCEaN project:

For more information or in case of questions, please get in touch with stephanie@renewables-grid.eu.

Stephanie joined the Renewables Grid Initiative in 2013. Her main responsibilities lie with RGI’s communications and media work and she is leading the good practice award activities. She previously worked in the communications team of the European Climate Foundation.
Stephanie has studied at the Universities of Marburg and Hamburg, Germany, and the University of Southern Queensland in Australia. She holds degrees in political science and journalism.
t: +49 30 2332 11017
stephanie[at]renewables-grid.eu
Back