RGI, NABU and six German grid operators look back on four years of successful cooperation and forward to ongoing exchange for bird protection 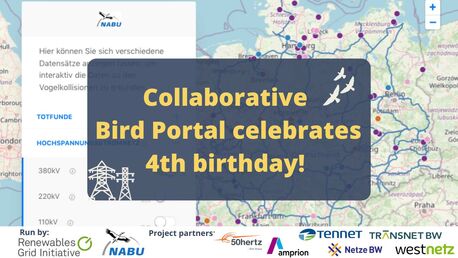 Power lines can, just like all infrastructure, be obstacles for flying birds. Despite efforts in the planning and operation of electricity grids, birds continue to die from collisions or electrocution on unsecured lines and pylons. Exactly how many can only be estimated. In order to shed more light on this, RGI & NABU have been jointly operating an online platform for four years, through which anyone can report the discovery of dead birds under power lines and pylons directly to NABU. The project is supported by all four German transmission system operators - 50Hertz, Amprion, TenneT & TransnetBW - as well as two distribution system operators - NetzeBW & WestNetz.

The "Bird Portal" was established by RGI as part of the ‘European Grid Declarations’. It represents a unique collaboration between grid operators and NGOs aimed at improving the information base for bird protection measures on new and existing power lines. By analysing the detection data directly from the field, critical line sections can be identified and mitigated, for example by placing bird protection markers on the lines, and future planning processes can be optimised by avoiding sensitive areas.

Since October 2017, a total of 214 reports have been received, equating 333 birds. Of these, 278 birds are clear power line victims: with 42 percent of the findings, power line collisions are the most common cause of death, followed by 39 percent in which birds died due to electrocution on unsecured power poles. Apart from a few inconclusive findings, 10 percent of the findings also concern overhead railway lines. “The real danger to birds from power lines is still drastically underestimated by the number of reports, as only a fraction of fatalities is found and reported”, says Ute Eggers, bird conservation expert. According to a study commissioned by NABU from 2017, an estimated 1.5 to 2.8 million birds die each year in Germany from power lines alone. By registering any birds found through the online platform, anyone can help to improve the data and knowledge.

Incoming reports are checked and evaluated ornithologically. The findings are then forwarded to the responsible grid operators and published online in an interactive map. In addition to discussing the findings from the collected data, the project partners value the regular exchange on methodology, technology and communication of bird protection measures in the German power grid. A public event in the summer of 2022 will bring this dynamic exchange to a larger stage and involve further actors in the discussion. More information will be available in the coming months on the RGI website. Stay tuned!

Liam joined RGI in June 2019 as part of the communication team. As of 2021, he is responsible for the coordination of two national TSO/NGO collaboration projects in Germany and one project in Ireland. He is also the contact person for topics relating to nature protection and ecosystem restoration. He has previously worked in public relations, research, teaching and sustainable development. Liam holds degrees in Modern Languages (BA - German, Spanish and French with Dutch) and Environment, Development and Policy (MA) from the Universities of Newcastle and Sussex (UK) respectively.
+49 30 7677194 55
liam[at]renewables-grid.eu
Back