The winners of the 2014 “Good Practice of the Year” competition were awarded at the 4th European Grid Conference in Brussels today. The Dutch-German TSO TenneT won the prize in the “communication and participation” category and Danish pylon designers Bystrup and NGO BirdLife took home trophies for “technology and design” and “environmental protection”, respectively. 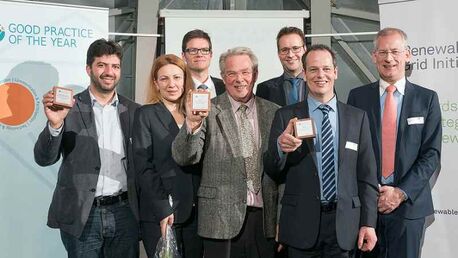 TenneT won the award, created by the Renewables Grid Initiative (RGI), for their info-mart concept. “The info-marts have enabled us to begin the public dialogue at a very early stage – and specifically in personal discussions on equal terms,” says Ben Voorhorst, Board Member at TenneT TSO. “The more than 6,000 personal discussions that we managed to conduct at the info-marts along the planned transmission corridor are crucial for the project’s acceptance. The approximately 3,000 statements and concrete suggestions from the public have helped us to improve the project planning at this very early stage, and TenneT will actively involve citizens also in the further procedural steps.”

BirdLife’s “Preventing electrocution of endangered birds” project won in the “environmental protection” category. It was a jury favourite because it addressed and solved a specific, relevant problem and is an excellent example for the effectiveness of a multi-stakeholder initiative. The project was led by the Bulgarian Society for the Protection of Birds (BSPB) and BirdLife International and was successful in preventing endangered birds from electric shocks on distribution power lines in Bulgaria and the Sudan by installing special plastic insulators on dangerous poles. "It's very cheering to have the value of our work recognised with this award. It's amazing what can be achieved for wildlife when conservation NGOs and industry work together", said Angelo Caserta, Regional Director of BirdLife Europe.

Danish power pylon design and engineering company Bystrup received the “technology and design” award for designing the “Eagle Pylon”, a pylon that not only serves as a visual alternative to classic lattice pylons, but also proved an asset in gaining public acceptability, easing production and installation, and reducing maintenance efforts. Founder of Bystrup, Erik Bystrup, said: “The winning design is simple, cost-competitive and as opposed to traditional solutions, can be constructed in a single day. Its innovative structure also means that it will be much shorter than existing pylons, and therefore less intrusive.”

The ten best cases of the 2014 competition can be viewed in a brochure illustrating the top award contenders. It can be downloaded here . Apart from the winners it includes commendable practices from Lithuanian Grid Operator Litgrid, British TSO National Grid, Italian DSO Enel, the German Federal Network Agency and others.

Alongside Marie Donnelly, the independent jury of experts that elected the winners consisted of:

The aim of the competition is to disseminate the many good practices out there and give them the recognition they deserve as well as to inspire future action and innovative thinking. The award builds upon a European-wide best practice exchange that the Renewables Grid Initiative (RGI) started in 2012. Since then, RGI has been collecting cases on how to make grid development more transparent, participative and increasingly environmentally sound, so as to contribute to social acceptability and the timely implementation of needed projects.

We thank the international audit and advisory company MAZARS for accompanying the process and supporting the jury by conducting an independent initial evaluations of all the submissions.

Stephanie joined the Renewables Grid Initiative in 2013. Her main responsibilities lie with RGI’s communications and media work and she is leading the good practice award activities. She previously worked in the communications team of the European Climate Foundation.
Stephanie has studied at the Universities of Marburg and Hamburg, Germany, and the University of Southern Queensland in Australia. She holds degrees in political science and journalism.
t: +49 30 7677 19457
stephanie[at]renewables-grid.eu
Back