Our best practice webinar takes a deep-dive into the practice of Integrated Vegetation Management (IVM), whereby the spaces beneath power lines can become biodiversity hubs with numerous benefits for local people. 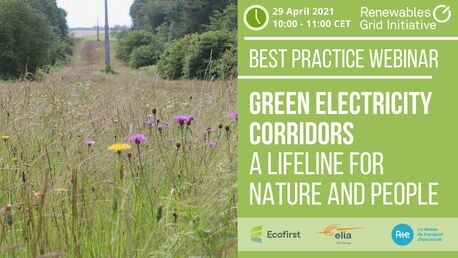 Aside from the habitats created, by working together with people on the ground, such as farmers, bee-keepers and hunters, local populations also have a stake in this technique. Furthermore, IVM has proven to be several times cheaper than conventional forms of vegetation management in the long term.

In this best practice webinar, RGI gave the stage to some of the actors at the forefront of IVM implementation in Europe:

The LIFE project received recognition under RGI's 'Good Practice of the Year' award, winning first prize in 2015 in the category of Environmental Protection. Furthermore, in 2019, RGI and Ecofirst collaborated on a briefing paper, exploring the benefits of the practice, common roadblocks, tools to overcome these and ways in which IVM policies can be better developed and implemented.

The webinar took place on Thursday 29th April, from 10:00 - 11:00, and will featured presentations from Ecofirst, Elia and RTE, followed by an open Q&A discussion round.

You can find all documentation below. In case of questions, get in touch with liam@renewables-grid.eu.

Liam joined RGI in June 2019 as part of the communication team. As of 2021, he is responsible for the coordination of two national TSO/NGO collaboration projects in Germany and one project in Ireland. He is also the contact person for topics relating to nature protection and ecosystem restoration. He has previously worked in public relations, research, teaching and sustainable development. Liam holds degrees in Modern Languages (BA - German, Spanish and French with Dutch) and Environment, Development and Policy (MA) from the Universities of Newcastle and Sussex (UK) respectively.
t: +49 30 2332 11015
liam[at]renewables-grid.eu
Back